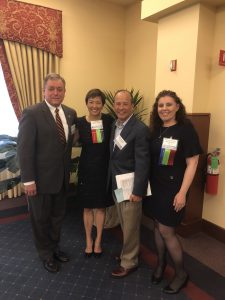 Michael S. Wahl, MD, FACEP, and Mark E. Cichon, DO, FACEP, FACOEP (dist.),were honored with ICEP’s annual awards during  the Annual Business Meeting at the Spring Symposium on May 3.

Bill. B. Smiley Award
Dr. Wahl, of Glenview, is the recipient of the Bill B. Smiley Meritorious Service Award, which honors individuals who have made significant contributions to the advancement of emergency medicine in Illinois. The Bill B. Smiley award is ICEP’s highest honor.

Dr. Wahl is a Past President who served two terms on the ICEP Board of Directors and on the Executive Committee for 5 years. He continues his service today on both the Finance and Patient & Physician Advocacy committees.

Dr. Wahl is celebrating 20 years as the Medical Director of the Illinois Poison Center, a program of the Illinois Health and Hospital Association in Chicago. He has spearheaded the creation of opioid guidelines as a partnership between IHA, ICEP and other health care stakeholders with the Illinois Opioid Crisis Response
Advisory Task Force.

Dr. Wahl is also a Senior Clinical Educator at the University of Chicago and an attending physician for NorthShore University HealthSystems. He is active on the Illinois EMSC Advisory Board and on several Illinois Department of Public Health committees.

Dr. Cichon is a Past President of ICEP who served 10 consecutive years on the Board of Directors, including 5 years on the Executive Committee. He continues his service to ICEP as a longtime member of the EMS Committee.

He also serves as the Medical Director and Chairman of Region 8 for the Regional Emergency Medical Services Advisory Committee as well as a member of the Illinois Department of Public Health State Trauma Advisory Committee and on the Board of Directors for the Chicago Metropolitan Trauma Society.